“Irish Inspirations” was begun in 2003 with the musical assistance of one of my dearest friends and most treasured musicians, Rafaele Schilewa.

She and I had the most wonderful time crafting these pieces. A few of the selections are traditional Irish tunes and the others are original compositions which draw their inspiration from Celtic harmonies, rhythms, and instrumentation.

But, before we could properly finish the album, Rafaele discovered she had breast cancer. She fought bravely but died a mere 20 months after her diagnosis.

So, the project languished.

Because A) it wasn’t finished – there were many, many things we planned to change with a couple more recording sessions and B) it was impossible to edit or re-record the material without losing her performances and I couldn’t bear to do that. I still can’t.

But friends and fellow musicians have told me they think that I am being too picky – that I should go ahead and release this work as a tribute to Rafaele and the music we made together.

I hope you enjoy these pieces – they came from the heart.

I would be remiss if I did not also mention my amazing recording engineer Mark Bunce who, in addition to his production work, lends his musical abilities on the occasional track. Thank you Mark!

A few bits of extra background information on specific pieces:

Oh’ My Katie Wee was composed while I was expecting my daughter. Whenever I played something she felt did not belong, I felt an editorial kick. For a live version of this tune check out the videos page.

Purposely Untitled was Rafaele’s favorite piece on the album. We never found the perfect title. I am currently soliciting feedback from listeners regarding a suitable title. If you would like to make a suggestion, please use the contact form. Until I settle on a name it remains “purposely untitled.”

Once I saw a Rose has lyrics from a poem I once wrote. They are never sung but run through my head while I play the piece. Here is an excerpt:

Both Brian Boru’s March and Garryowen were arranged for solo harp by my mother, harpist Nancy Morse. I further arranged the pieces for additional harps and other instruments.

Katherine’s Reel was written for a harp student and utilized her favorite finger patterns. The instrument that sounds like a flute or traditional Irish whistle is, in fact, a wooden recorder from Germany.

The Road To Glengariff was written with musical thematic suggestions from a student.

Jig No. 1 was written for a student who needed encouragement to practice three-fingered patterns. 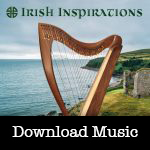